The theme of the exhibition of four Finnish female photographers – Mari Hokkanen, Anni Kinnunen, Kati Leinonen and Susanna Majuri is magic and dreams. Together their images create a fairy tale of an imaginary magical world, where the laws of everyday life do not exist. The exhibition comprises both photographs and video films.

Nature is an important element in these works.  In her series Imaginary Homeland Susanna Majuri declares that water paints with her, it emerges people and landscape together. In the images of Kati Leinonen water makes reflections on the surface of the oily pond to become a path to the magical underworld. Performance is a starting point for the art works of Anni Kinnunen and Mari Hokkanen. In her Personal landscape series Anni Kinnunen explores the spaces where nature and urban environment meet, paying special interest on human marks in nature. The Flower performances series by Mari Hokkanen is based on narrative photographic stories with flowers. Hokkanen builds her pictures from symbols and metaphors.

Curator Alla Räisänen works as a director of Northern Photographic Centre, Oulu, Finland since 1999. She has curated several exhibitions that has been presented  in Finland and internationally, e.g. in Germany, Austria and China.

Anni Kinnunen (b. 1978) works and lives in Oulu, Finland. She graduated from the Oulu University of Applied Sciences in 2008, majoring in media and communication. Kinnunen makes both photographic and video works. Her works have been exhibited in solo and various group exhibitions in Finland and internationally.  Her works are displayed in public and corporate collections.

Mari Hokkanen (b. 1979) is a Helsinki based photographer, who works with digital photography and film. Her images are performative self-portraits, which can narrate a variety of stories and emotions. Hokkanen has had several solo exhibitions and her works have been presented in group exhibitions both in Finland and abroad, e.g. in the exhibition YOUNG ARTISTS 2011 at Kunsthalle Helsinki in 2011, Hyvinkää Art Museum in 2012 and Lahti Art Museum, where the exhibition The Allure of Light is open until 26 May, 2013.

Kati Leinonen (b. 1974) is a Finnish fine art photographer who works with wet plate collodion, digital photography and video. She has studied photography in London College of Printing, and audiovisual media culture in the University of Lapland, Finland. Her studies of the wet plate collodion process have been conducted under France Scully-Osterman in Rochester, NY.

Helsinki based photographer Susanna Majuri (b. 1978) is known for magical images, where water is often a key element. Another recurrent theme in her works is the north both as a landscape and as a state of mind. Among other qualifications, Majuri graduated in 2007 as a Master of Arts from the University of Art and Design Helsinki, majoring in photography. She is a member of the internationally active artist group Helsinki School. Majuri’s works have been exhibited in numerous international joint and group exhibitions since 2005. Her works are on display in several major public and private collections, both in Finland and abroad. 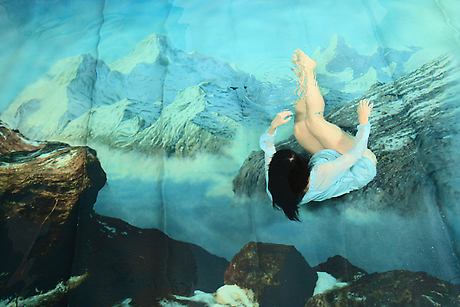 Mari Hokkanen, Don't know what you are talking about, 2012