Double Flowers And Other Stories 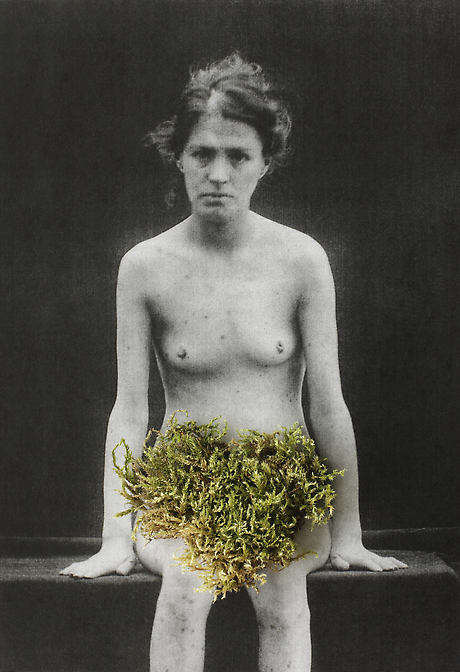 In “Studies on Hysteria”, published together with Freud in 1895, Joseph Breuer labeled hysterics as "the flowers of mankind, as sterile, no doubt, but as beautiful as double flowers”. In cultivated flowers, doubling comes from the replacement of the stamens by petals, producing the effect of flowers within flowers. Like a double flower, according to Breuer, the hysteric is the product of luxury and cultivation, a form of seductive female abnormality.

The work is based on reinterpretation of medical photographs of women from the end of 19th and the beginning of 20th century. The women depicted in the images are predominantly hysterics. The historical photographs were taken from various medical books, magazines and journals, where they played the role of unambiguous evidence of illness and abnormality. They were juxtaposed with a number of different objects, plants and animals, which directly refer to Dutch still life paintings and their precisely codified symbolic meanings.
Through my intervention, the appropriated medical portraits, which aimed at providing pure visibility and immobilizing the elusive symptoms of madness and related diseases, are destabilised in their original function. Each of the specific foreign elements were chosen in order to overturn the primary medical mode of the illustrations as portraits of pathology, with which the individual had been turned into nothing more than the bearer of pathonomic symptoms. These assemblages, constructed in ways that emphasise the respective idiosyncracies of the individual female portraits, were then rephotographed. Owing to the slight transition in symbolic meaning, this work aims to problematise the apparently stable visual boundary established within the medical context between the “normal” viewer and the “pathognomic” patient.

The starting point of the work is a segment of a transcript from the famous Tuesday lessons held in the1880s by the French neurologist Jean-Martin Charcot, „the most celebrated doctor of his time“. These lectures, which concentrated on hysteria and hypnosis, were open to public and attracted a large international audience, including celebrated artists and writers of the time, thereby famously causing traffic jams in Paris. During the lectures, Charcot, also known as Napoleon of neuroses, displayed his hypnotised female patients and provoked their hysterical attacks for the sake of demonstration and as apparently objective evidence of his neurological theories of hysteria.

The segment of the Tuesday lesson, read by a computer generated male voice, focuses on Charcot’s demonstration of a provoked attack of rhythmical chorea, a hysterical attack similar to a dance, in an unidentified female patient. This episode is restaged by a dying fly dancing on its back. Against the uniformly blue backdrop, the fly is shown as an almost abstract white form, whose movements appear coreographed and closely follow the logic of Charcot’s detached elaboration on the stages and characteristic of spontaneous as well as provoked of the hysterical attacks.

In the influential historical medical journal "Nouvelle iconographie de la Salpetriere" (1888-1918), founded under the auspice of J.M. Charcot, photography in combination with other visualising techniques, was implemented as a means of seemingly objectively constructing hysteria as an illness. Hired by Charcot as the first person in history to officially hold the position of the director of photographic services in a hospital, Albert Londe (1858-1917) crucially influenced the early development of medical photography. He experimented with chronophotography, invented new cameras and defined precise parametres under which each body part of hysterical patients stationed at the Salpetriere was to be systematically photographed. Thus, the resulting images acquired the status of medical evidence, mapping the symptoms of the elusive illness onto the patients’ bodies.

The black-and-white medical photographs of codified hysterical hand gestures from the "Nouvelle iconographie" were converted into cyanotypes and rephotographed after glittering beads had been placed on them. This intervention destabilises their original function as apparently unambiguous medical evidence of hysteria and translates them into the domain of aesthetic objects, which remain open to multivalent symbolic interpretations. The images are accompanied by pages culled from a manual for experimental pathosocial studies from the beginning of the 20th century, focusing on descriptions of different instruments that were used for measuring a variety of bodily functions. By deleting certain parts of the text rendered in a dry scientific language, as well as the illustrations of the measuring devices, their intended function and the field of application become ambivalent and somewhat enigmatic.

One of the oldest known neurosis, first having been mentioned in the Egyptian papiri, hysteria has always been linked to the female condition and the lack of emotional selfcontrol. Its name etymologically refers to the oldest theories which defined hysteria as suffocation of the womb, looking for its causes in the movement of a woman's uterus to various locations within her body. Female sexual desire has remained the dominant subtext within various theories of hysteria well into the 20th century, psychoanalysis included.

The installation juxtaposes various scientific and non-scientific documents from different epochs pertaining to the sexual theories of hysteria. Starting with the extracts from the Ouevre by Ambroise Paré, a famed 16th century surgeon who prescribed clitoral stimulation with aromatic oils leading to so-called paroxysm, or what woud be later become known as female orgasm, over to various technical drawings included in patents for electromechanical vibrators which replaced the manual stimulation at the end of the 19th century, the work traces a number of disciplinary methods used for treating female sexuality understood as form of hysterical disorder. A wildly dancing woman turning around her axis and flailing her naked legs, as well as upside down hanging images of two females in corsets, all of them faceless and anonymous, stand for the untamed sexuality, just as much as the graphic representation of measurements of different bodily fluids, ranging from urine, over vaginal lubrication to tears.  The installations is shown in a darkened room with dominant overtones of red, which according to Charcot’s research is the favourite colour of the hysterics.

The installation engages with different historical techniques of clinical research and laboratory mesurements. Hysteria is a disorder which can mimic any other known disease, yet cannot be linked to any traceable organic causes. At the end of the 19th century, the school of Salpetriere, under the auspice of the neurologist J.M. Charcot, systematically implemented an array of visualising techniques, photography just being a recent, in order to unambiguously chart and categorise the fleeting symptoms of this otherwise invisible disorder. Every aspect and physiological function of their hysterical patients was placed under scrutiny, dilligently measured and monitored.

The drawings on transparent blue foils conflate a number of curves that represent breathing irregularities, trembling hands, various tics and other motor disturbances of male and female hysterical patients of the Salpetriere. The measurements were taken before, during and after their attacks, in „normal state“, as well as under hypnosis. Displacement and alienation of the appropriated medical documents play a crucial part in the work. Whereas the doctors aimed at producing objective traces of physical disorders which were instrumental in generating new medical knowledge, my intervention turns the graphic transcrips of various movements of anonymous bodies into poetically charged objects. The drawings are juxtaposed with an image taken from a medical encyclopedia of an eye in extreme close up, manipulated in order to render it as a rather abstract form in different shades of blue. The image of the eye underlines the surveillance aspects of the medical endeavour.

Rather innovatively, Charcot used hypnotism as an experimental technique in his hysteria research. Before his interest in this phenomenon, hypnotism had a quite dubious status as a circus attraction. Owing to his considerable influence as recognised medical authority, Charcot almost single-handedly managed to change this situation and at least during his lifetime install hypnotism as a therapeutic and experimental tool within mainstream medicine. He claimed that hysteria and hypnotism are basically identical states and that only the hysterics could be hypnotised. Instead of just waiting for hysterical attacks to happen, Charcot and his team of doctors hypnotised their patients and induced hysterical fits, endlessly repeating them or slowing down their course in order to facilitate more detailed monitoring of their various stages and characteristics. His hypnotised hysterics performed various feats, such as balancing between two chairs, or were pierced with needles in order to test their sensitivity to pain in this manipulated state. Shortly before his death, Charcot’s theories of hypnotism were challenged by his medical colleagues, which soon lead to discreditation of his whole research on hysteria. However, scientific interest in hypnotism resurged in the 20th century when considerable research was done measuring hypnotic susceptibility in “normal” population.

A video recording of a night drive, which was manipulated in order to reference the night vision cameras used by the military, is juxtaposed with fragments of hypnotic induction scripts used in the Stanford Hypnotic Susceptibility Scale. The text in which all the senses of the viewer are manipulated is read by a computer-generated female voice.

The work references physiognomic studies from 18th and 19th century, as well as

the early history of photography and Charcot’s hysteria research. With the invention of photography one of its early applications was in medicine and physiognomy. As a seemingly objective medium it was used, among others, by Duchenne de Boulogne as a means of recording electrophysiological experiments aimed at mapping and categorising the facial muscles, which are responsible for various facial expressions. In making his photographic atlas of expression generated by electrical stimulation, Duchenne’s method was tautological and normative.

The central part of the work are self-portraits taken at moments of ecstasy when I had no rational control of myself. These images question the possibility of fully mapping and controlling the body. My face is deformed into grimaces without clear semantic content. The open mouth is a recurring motif in my self-portraits. In the visual canon it is often related to the loss of identity - although the face is visible, it is no longer readable. The orgasmic face thus undermines the attempts of standardising and classifying. Staged images are a direct reference to Duchenne’s photos – a hand of my partner, like Duchenne electric dyods, manipulates my facial expressions - they are no longer ex-pressions but im-pressions. Additionally, I appropriate images of female hysterics in ecstatic positions from the “Iconographie photographic de la Salpetriere” which were used to codify the visual representation of hysteria, understood at the time as a pathological form of the female sexual desire. By implanting my face in the images of Charcot’s hysterics, I undermine the normative function, which the images originally served.